For university students with the possibility to earn ECTS points

This summer academy class provides a brief introduction to the discipline of International Relations and to major themes in world politics. Major theories covered include realism, liberalism, constructivism, Marxism, critical theory and feminism. These theoretical frameworks will be applied to international security, power, global economy, identities and ideologies, foreign policy analysis, human rights, and international organisations. The class pays particular attention to the relationship between the discipline of International Relations as a field of knowledge and its application and/or relevance to the experience and interests of actors to the world at large.

Today’s world society is full of conflicts, due to colonialism and post-colonial politics, economic dynamics, climate crisis, diversity and the overall globalization.

Sometimes, intercultural issues derive from differences in the cultural encoding and decoding of our activities. Often nevertheless, power asymmetries, ideological presuppositions and conflicting value systems are interpreted (and minimalized) as intercultural issues or questions of diversity and thereby devalued. Instead of an integrative and harmonistic approach, from a post-colonial perspective one could argue that an improvement in the state of underprivileged groups, classes or people never was achieved by the generosity of the ruling class but by conflict, struggle, fight and resistance. A change in existing power structures – according to this view – cannot be scrounged, but has to be fought for.

For university students with the possibility to earn ECTS points

This course introduces you to the most important foundations of the study and research on cultural diversity. From the principal understanding, that diversity is a product of socio-communicative processes, we will find ways to develop the standpoint that diversity is an expression of the relational connections between social identities. On the one hand, diversity is an integrating momentum of life that helps us to develop and socialize in specific societal environments. On the other hand, the perceived cultural diversity within the society or within an organization is a result of our own activities and the way we define our relationships. The deeper understanding of this mechanism sheds light on the potentials of diverse socio-cultural configurations.

The theories of exclusion and inclusion in recent sociological and cultural research (Luhmann, Rathje, and others) clearly show that discrimination and biases in leadership behavior are strongly linked to ideological imprintings and stereotypical social cognitions. This holds true for the respective phenomena all around cultural diversity as well, where “culture” is sometimes mistaken for “power” or “competence”. The development of socio-cultural sustainable solutions in the context of a diverse society that needs integration will help to overcome the categorical underpinnings with regard to the related conflict. This course will treat some of these phenomena with special attention towards migration and intercultural integration.

Also for highschool students starting from 16 years, 2 weeks only

Starting with “Culture and Identity” you will be introduced in to the concept of identity and influences of culture. Continuing with “Global Dimensions: Stereotypes, Discrimination & Inequality” you will talk on the cause and effect of stereotypes and discrimination. In “Global Citizenship and Responsibility” you will reflect on your own complicity in global power relations and discuss the concept of cosmopolitanism. In “Global Actors: Introducing International Organizations & the UN” you will talk about the role of international organizations and be part of a Model United Nations. You will also visit Strasbourg and get to know the European Parliament.

The session “Active Citizenship & Volunteerism” tackles the concept of voluntary work. You will also identify issues in your local community and discuss how these can be solved. During “Sustainable Development: Being global changemakers and peacebuilders” you will discuss the SDGs, sustainable development and alternative approaches.

Participants are awarded a certificate after successfully completing their courses at the Summer Academy. 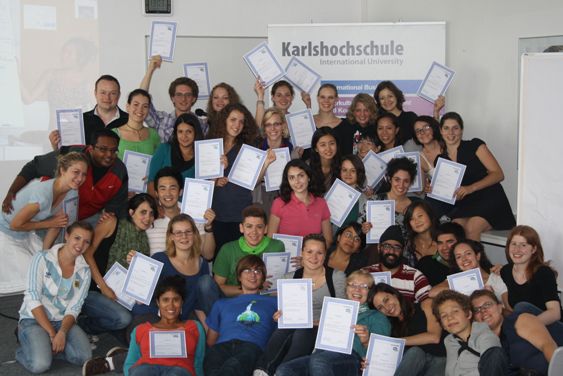 Moreover, participants in Track 1 and 2 have the possibility to earn between 3 and 6 ECTS.

In order to acquire 3 ECTS points, participants have to participate for the first week and submit an essay.

In order to acquire 6 ECTS points, participants have to participate during both weeks and submit a written assignment of 15-20 pages.

Please note that students in the first track are only allowed to gather credit points if they are matriculated at an institute of higher education.

Please find more info on how to earn ECTS credit in this documents: 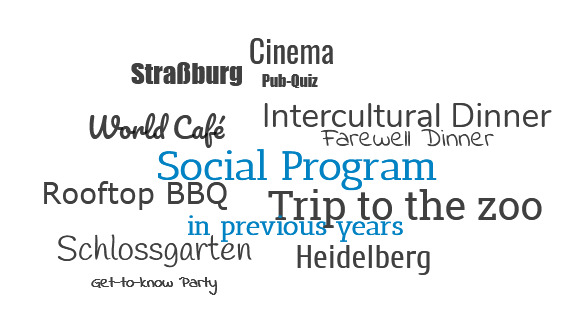 Trip to the zoo

Karlsruhe is easy to reach by train as it is the junction of the ICE-line Hamburg – Frankfurt – Basel and the east-west connection Karlsruhe – Stuttgart – Munich. You can find more information about the exact arrival and departure times from the Deutsche Bahn AG.

Take tram no. 3 (in the direction of Heide) or tram no. 4 (Waldstadt) from the tram stop in front of the main train station to the stop Karlstor; from there it is a two minute walk to the North.

From the northwest (Cologne)

From the north (Frankfurt)

Take the A5 in the direction of Karlsruhe and Basel.

From the east (Stuttgart)

Take the A8 to the Karlsruhe interchange (Dreieck), then onto the A5 in the direction of Frankfurt.

From the south (Basel)

Take the A5 in the direction of Karlsruhe and Frankfurt.

From the west (Saarbrücken)

Karlsruhe is close to Frankfurt International Airport. The best way to reach Karlsruhe from Frankfurt Airport is by train. It only takes about one hour and trains depart directly from the airport.

Furthermore, Karlsruhe/Baden-Baden Airport is in close distance to Karlsruhe. You can reach the city by bus and train within one hour.

You can find more information about the exact arrival and departure times of trains and busses from the Deutsche Bahn AG.

Take tram no. 3 (in the direction of Heide) or tram no. 4 (Waldstadt) from the tram stop in front of the main train station to the stop Karlstor; from there it is a two minute walk to the North.